On Stage Continued!! We Move to the Brazilians!

For this portion of On Stage, the Brazilian Competitors, I thought I would present in some detail some interesting facts about each player!  The Brazilians have been competing since 1997, their first at Hendersonville NC.  Many of us know them quite well, however; if you are like me, it is both interesting and enjoyable to review their bios!!  I  will begin with their serving President, Dr. Luiz Pimentel.  Remember, to locate these and other On Stage personnel, enter the words On Stage into the Search Rectangle and click on Search.  Do Enjoy!!!  Stan 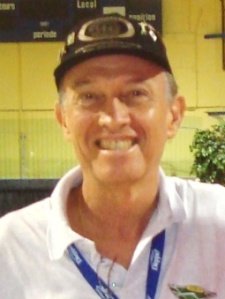 Luiz Pimentel is a 67-year-old retired military officer and plastic surgeon, living in Niterói, Rio de Janeiro, Brazil. He started playing shuffleboard
as the first understudy of Michael Zellner in 1996 and together they founded the Brazilian Shuffleboard Association on November 1st, 1996. Since then he has played in numerous ISA Tournaments around the world. Luiz constructed
the first shuffleboard court in Niteroi, Rio de Janeiro next to his home, where the players from there get together and train 2 times per week.  Some of his pupils are Pedro Caldas, Hernani Barcellos, Imbo Borges, Bernar Borges and Delson Caldas.
And now each of these trainees has indeed become trainers themselves and the lifecycle continues.  As ABS Vice-President, Luiz was instrumental in planning and hosting the Brazilian Inaugural Tournament in Niterói, Rio de Janeiro in 2002, and then again for the World Shuffleboard Championship in 2005. Luiz Pimentel, since 2011, has been the 2nd President of the Brazilian Shuffleboard Association and
in 2012 was proudly inducted into the ISA Hall of the Fame.  Luiz is a trainer, a player and most of all a friend to everyone in the shuffleboard community. He is definitely a force to be reckoned with on the court.

1 Response to On Stage Continued!! We Move to the Brazilians!