Gibb Stannard at 99 Continues To Shuffle 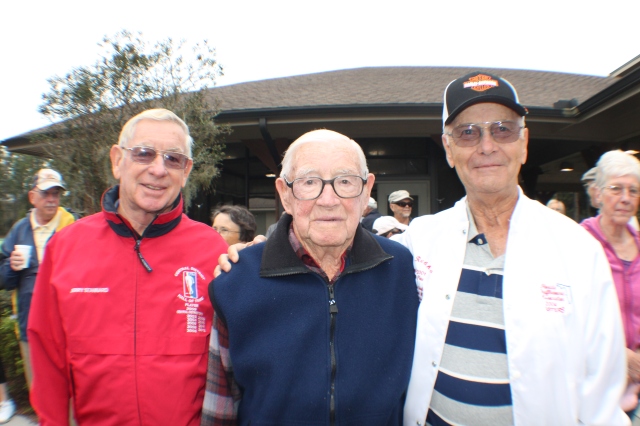 Above we have Hall Of Famer Jerry Stannard, his father, Gibb Stannard and FSA President Phil Rebholz, also a Hall of Famer.   Set aside all of those “Hall of Fame” designations for the real Hall of Famer, Gibb Stannard, who at 99 continues to shuffle!!  Son Jerry contributed $99.00 to the Tournament to-day at Lakeland > P10, Roll of Champions Presentations; $1.00 for each year his father has lived.  Thank You Jerry!!

I have been reporting on Gibb for a number of years, always in admiration of his spirit and ability!

In 2010 I wrote this:  “Gibb Stannard in 2nd Place!! Not bad for a man in his 90s; a man in his 90s competing against healthy young virile men in their 60s!!!!  Gibb loves the sport and has allegedly said that he would sooner give up life than give up shuffleboard!!  Now that is determination!  In case you had not made the connection, Gibb is in 2nd place in the Reiny (District Amateur) Race of the Central District.  I am going out on a limb and predict that indeed Gibb will finish in the Top 8 and will be a competitor in the Reiny Masters at Lakeland, 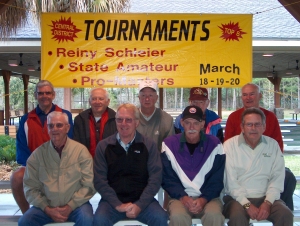 In fact my prediction was BANG ON; to the left is a pic of the District Amateur Winners of 2010.  Gibb is in the  2nd row, 2nd from your right, with the burgundy cap.

2 Responses to Gibb Stannard at 99 Continues To Shuffle