We Give You Article #4 re John Brown + A Bonus!! No matter how well you know John, I guarantee you will learn something new!! Be sure and see the pdf file. 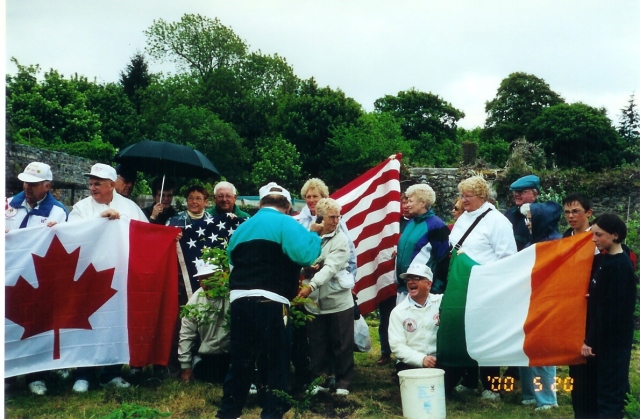 I first met John & Dolores Brown on an INAUGURAL  to Ireland > way back in the year 2000!!!  We continue to have fond memories of that Inaugural, memories enriched by John’s many stories on the Bus as we travelled daily.  Each time I see John (infrequently) I usually greet him with the Punch Line from one of his many jokes >>> “I didn’t see that Ewe Turn”!!!

The pic above is of a Tree Planting Ceremony > and of course you see John in the lower right portion of the pic.  Looks like I caught him in “transmit” > but no doubt it brought on laughter.  Cecile Messier, now that I look, is giving John a somewhat stern look!!!   Now to substantiate the claim I make in my title:   click 1 ACTUAL FOR JOHN BROWN BY ROY NORMAN  A great Story told by a great Friend and Gentleman.

HERE IS WHAT KENNY OFFENTHER HAD TO SAY ABOUT JOHN on the occasion of the presentation of the coveted MVP Award:

HE HAS PLAYED ON U.S. TEAMS MORE THAN 5 TIMES IN INTERNATIONAL COMPETITION. ALTHOUGH HE IS A SOMEWHAT SHORT MAN HE IS NEVER EVER SHORT OF WORDS. KNOWN AS ONE OF THE SLOWEST PLAYERS EVER– WITH MULTIPLE LOOKS AT HIS DRIFT CARD ON THE SAME SHOT, HE HAS ALSO BEEN ONE OF THE QUICKEST TO HELP SHUFFLEBOARD IN MANY DIFFERENT WAYS.

JOHN BROWN FROM INDIANA HAS TAUGHT ALMOST 1500 PEOPLE HOW TO PLAY. HE HAS WRITTEN A COLUMN FOR THE BRADENTON HERALD FOR 19 YEARS!. HE HAS GIVEN 1,916 PRAYERS IN DISTRICT AND STATE TOURNAMENTS AND HE HAS A BOOK AVAILABLE FOR PARTNERS TO GET TOGETHER AT STATE TOURNAMENTS FOR MANY YEARS. JOHN WAS TAUGHT SHUFFLEBOARD BACK IN 1946 BY HIS UNCLE HANSEL AND HE LEARNED HIS LESSONS WELL, BUT HIS BIGGEST VICTORY WAS WINNING THE HAND OF HIS WIFE DOLORES, A WOMAN OF APPARENTLY EXTRAORDINARY PATIENCE.HE WAS INDUCTED INTO THE FSA HALL OF FAME IN 2004 FOR HIS PLAYING PROWESS.AS HE RECIEVES THE MVP PIN TODAY WE WISH HIM “HAPPY SHUFFLING” THE SAME PHRASE HE CLOSES HIS NEWSPAPER COLUMN  WITH AND THANK YOU FOR YOUR UNIQUE CONTRIBUTIONS TO OUR SPORT.

Finally, why not enter “John Brown’ into the search rectangle AND hit Search.

1 Response to We Give You Article #4 re John Brown + A Bonus!! No matter how well you know John, I guarantee you will learn something new!! Be sure and see the pdf file.