We Give You The History of the FSA Central District Masters!! We Salute Austin in this article!!

Each year many of us look forward to the CD “Top 8 Masters”! The concept of the District Masters was conceived by Bill Smith, Tournament Director for the Central District.  Although conceived in 1987, it was  first played in Woodall’s Mobile Home Park in 1988; the following year 1989 in Georgetowne Mobile Home Park, both in Lakeland, FL.

The sponsor for those first two years was none other than Austin & Winnie McDonald. Not only did the McDonald’s demonstrate their generous support in “88 and 89”, they again sponsored the Pro Masters in 2005 and 2006!

I should add that Austin won the District Masters 3 Times.  Earlier this winter (2015) I was in contact with Austin’s daughter, Irene Pollock, and she told me that Austin continues to have a keen interest in shuffling AND she will be printing off articles regarding this year’s Masters!!

You may be interested to know that during this period Georgetowne Mobile Home Park was home to many distinguished shufflers > among them: Ken Worden, Virginia Worden, Glen Peltier, Austin & Winnie McDonald, Wilbur Estes as well as Paul Prescott’s father and mother.

Not only did Austin make a significant monetary contribution to Shuffleboard, he was a most successful Shuffler as evidenced by the following: He became a member of the OSA HOF in 1995; the FL State HOF in 2000; the CD HOF in 2005; and the CNSA HOF in 2007. 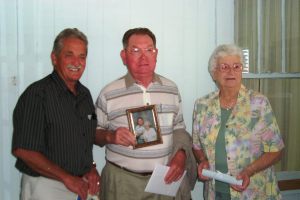 AUSTIN and WINNIE were inducted into the CD HOF by 1st VP Larry Brown in 2005.  See pic (by Stan) in the margin.

Information for this article taken from the archives of The Shuffler. Stan McCormack, 2015 03 16.

Check this Slide Show of the 2014 Reiny District Masters: http://photopeach.com/album/12lw023

2 Responses to We Give You The History of the FSA Central District Masters!! We Salute Austin in this article!!