We regret to inform you that Doris Bumstead of Wyevale ON and Lakeland FL passed away on the morning of 2015 03 27.  Doris was a member of the Lakeland Club as well as her home club, Coldwater, ON.  In MEMORY of Doris, I am going to insert a number of items.  Daughter Nancy, also a competent and avid shuffler, has announced that  there will not be a funeral but at a later date there will be a” Celebration of Life Service”  Nancy’s mailing address  is: # 6 Mary Jane Road Wyevale ON, Canada LOL 2TO 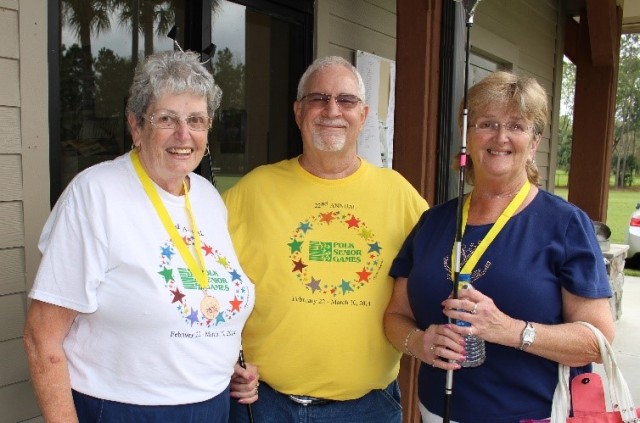 Pic above is of Doris in One of Her Many Happy Moments in Shuffleboard!!

Doris and Nancy, Mother and daughter, live in Wyevale, ON during the summer. You will find them both enjoying Florida’s sun from mid fall to the end of March. However; enjoyment for both is competing in one of Florida’s most highly contested sporting activities, SHUFFLEBOARD. You will find Doris and Nancy on the Courts 3 to 5 days of every week, maintaining both their health and personal relationships. Both are Florida “Pros”; that is they have both earned the highest status in the sport. Progression in Shuffleboard is closely monitored and rigidly controlled by the governing organization, the FSA, (Florida Shuffleboard Association).

The picture above is of the presentation of a Bronze Medal at the Polk County Senior Games, Feb. 26th, 2014 where they finished 3rd in their class. Last year, 2013, the Mother and Daughter Team finished 1st in class, earning a Gold Medal. Given the track record of the two, it is not hard to understand why both Doris and Nancy have been selected to represent Canada at the upcoming ISA (International Shuffleboard Assn.) Championship to be held in the North Simcoe Sports and Recreation Centre, Midland, August 11th to the 15th inclusive.**  Twelve women have been selected to represent Canada. Shufflers from Japan, Brazil, Germany, Norway and Australia will compete against shufflers from across Canada and the United States of America. Russia, Poland and Nepal are also expected to send teams!! Why not plan now to show up at the North Simcoe Sports Centre to see if Mother and Daughter, Doris and Nancy will help the Canadian Women Medal in this the 33rd International Shuffleboard World Championship.  Picture and Story by Stan McCormack. 2014 02 27

Doris participated in the Holland-German Inaugural of 2008 and received an Award from the host Dieter Hussmann.  See pic on left.

This is a delightful story, complete with pix: CE LE BRATE Doris’s Wins

Friend Gary Pipher said this: We are all saddened to hear of the passing of Doris Bumstead .  Competitor and friend Glenna Earle said this: “Am so sorry to hear of Doris’s passing. She was a wonderful lady in every sense of the word.  I remember at the Singles in St Pete’s (2013) having to play Doris. She  had beat me a few times and once again she beat me in the first round when we met.  Later on we had to play each other again.  As the game progressed it was clear that I was going to get the better of her finally. She said to me “ you wouldn’t beat an old lady would you? I would tell everyone it was elder abuse”!   She was such fun to know and play. I enjoyed her so much and will definitely miss seeing her on the courts.  Farewell my dear friend. RIP. Glenna.