Active Shufflers from FL Will Remember Ruth Parker!! She Just Picked Up Her 4th Gold Medal At The National Senior Games 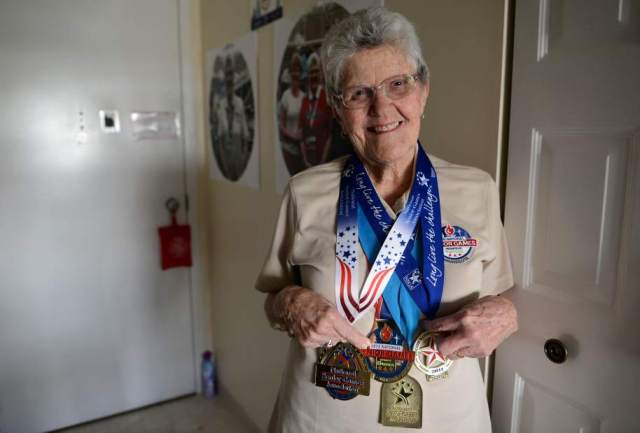 Ruth Parker had played shuffleboard for a dozen years while living in Florida with her husband, Art. When the couple, both in their 90s, moved back to the Pittsburgh area in 2013, she had nowhere to practice the sport she had taken up in her late 70s. But she was not deterred.

“I remembered the approach and steps; I did it in the hall,” she said of practicing in the couple’s apartment building, Luther Court, part of Zelienople’s Senior Lutheran Passavant Community. Using the skills and strategy she developed in Florida, Ruth Parker won a gold medal in her age group at the National Senior Games this month in Minneapolis.

It’s the fourth National Senior Games gold medal in shuffleboard for Parker, who raised six children with her husband while living in Ben Avon and Ohio Township.  “We moved to Fort Myers — that’s where I really shuffled a lot,” said Parker, 91. She competed in tournaments “only if someone asked me. … I was never near the top. I wasn’t good enough.”

She practiced or played almost every day when the couple lived in Sebring, Fla., said her husband, 94, who only attends the main competitions.  “I don’t want to make her nervous,” he said.

When she left home to practice or play, he told his youngest daughter he was “Ruth-less.”Several years ago in Florida, Ruth Parker and a partner took first place in a tournament.

“That’s when I started to go to the Senior Games,” she said.

In 2009, she qualified for the national competition and asked her youngest daughter, Laurie Parker of Upper St. Clair, a physical education teacher in the Avonworth School District, if she wanted to accompany her mother.  “They all decided to go,” she said of her children, who rented a house in California to watch their mother compete at Stanford University.

“On the last day, I looked over and said to my daughter, ‘I think I’m going to win a gold medal,’ ” and she did. “We were so excited,” Ruth Parker said. “There’s nothing like the first one.”

Laurie Parker said her mother does well in competition because she knows the strategy behind the game.  Even though she doesn’t practice as often as she once did, “she’s able to bring that part of the game back,” her daughter said.

“The nice thing about golf, shuffleboard and swimming is, they are all sports you can play at any age,” Laurie Parker said.

Ruth Parker is a Pittsburgh native who grew up in Connellsville.  She went into nurses’ training in 1943 at Allegheny General Hospital.  Her uncle worked for the city recreation department, so she went to one of the sites he oversaw, the swimming pool in Greenfield. Art Parker was at the pool that Fourth of July in his Navy uniform, helping to pass out ice cream treats.  “He gave me two ice creams,” she said of their meeting. They married in 1944 and raised six children born over a period of 18 years: Sandy Lea of Estero, Fla., Linda Cicconi of Ohio Township, Artie Parker of Cranberry, James Parker of Oceanside, Calif., Pam Scherer of Gibsonia and Laurie Parker.

Their mother quit nurses’ training to raise the children, but resumed her training at age 50 to earn her R.N.  After raising their kids, the couple moved to Florida and spent 31 years there.

They came home after applying to Senior Lutheran Passavant Community.

“I wasn’t even aware she was going to compete,” said Laura Roy, executive director of the community. “To come back and show off her medal — we were thrilled.”

There are no plans to build a shuffleboard court in the community, which is undergoing some construction, “but I wouldn’t rule it out” in the future,” Roy said.

Ruth Parker said raising her children kept her in good shape for many years, along with driving them to and from athletic practices and helping to coach their swim teams.

“Once you retire, you’re not finished,” she said. “You can start anything you want to do.”

1 Response to Active Shufflers from FL Will Remember Ruth Parker!! She Just Picked Up Her 4th Gold Medal At The National Senior Games