Increasingly, Districts Are Creating “Their” Hall of Fame!! 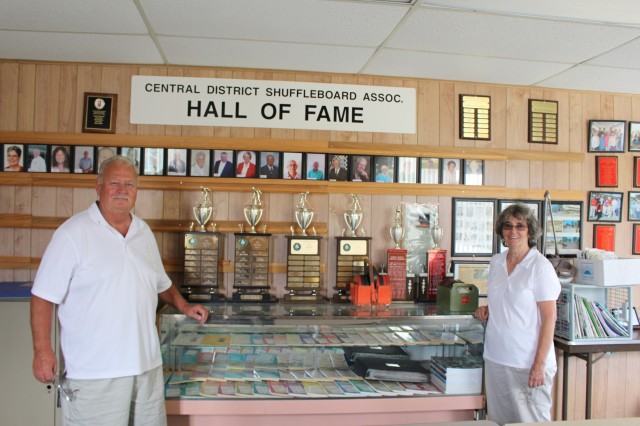 The Central District was the 3rd District to create their personal (District) Hall of Fame.  Suggest you read this article to gain appreciation:  https://theshuffler.net/2015/03/09/we-share-with-you-the-story-of-how-the-cd-hall-of-fame-came-about/

The CD HOF in Winter Haven has been well maintained by capable Curators beginning with the Browns, Larry and Ruth, who were the initial curators.   Following the Browns, the Corbeils, Jim and Marlene took on the project.

AT THE TOP we have our current HOF Curators, Linda and Chester Sines!!  Hats off to the Sines for taking on this significant project!!  Their 1st official task was accepting the Cues of Winnie and Austin McDonald.  The Cues will be hung to the left of the HALL OF FAME sign (see pic at top) with this brief message below:

Each year many of us look forward to the CD “Top 8 Masters”! The concept of the District Masters was conceived by Bill Smith, Tournament Director for the Central District.  Although conceived in 1987, it was  first played in Woodall’s Mobile Home Park in 1988; the following year 1989 in Georgetown Mobile Home Park, both in Lakeland, FL.The sponsor for those first two years was none other than Austin & Winnie McDonald. Not only did the McDonald’s demonstrate their generous support in “88 and 89”, they again sponsored the Pro Masters in 2005 and 2006! The Cues of Winnie and Austin were placed here in 2015 to ensure McDonalds significant contribution received the respect warranted.  Stan McCormack, FSA Historian.  2015 11 16.  You may wish to also read: https://theshuffler.net/2015/03/16/we-give-you-the-history-of-the-fsa-central-district-masters-we-salute-austin-in-this-article/

It is willing and able shufflers as identified above who make Shuffling the great sport that it is!!!!