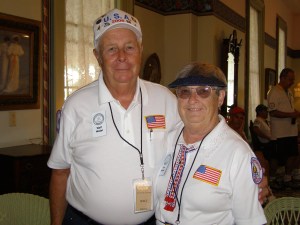 Jerry Stannard observed that for nearly three decades the Wedels have earned the respect of shufflers everywhere by winning more than twice the 200 minimum points required for membership, and  by serving as National officers, tournament direction and generously helping shuffleboard in so many ways.  The players present for the induction ceremony supported the induction with a standing ovation.  The Wedels responded briefly with sincere appreciation for being so honored.

The Wedels have three children and several grandchildren, mostly in the neighborhood of their fine farms in Michigan.  Before shuffleboard, the Wedels were also leaders and champions in Michigan and national horseshoe pitching.  The Southwest Coast District is very proud of Walt and Ann Wedel.

Thursday, November 26 is Thanksgiving – no District tournaments this week.