A 11 Amateur Any Doubles State Sponsored at Winter Haven!!

The Lakeland Ledger was invited to the Opening of the Winter Haven Event. I had expectations of them showing up because I had informed them in advance that the Mayor of Winter Haven would be attending.  Although they let me down, they have  subsequently agreed to publish the article to follow, prepared by Your Truly. 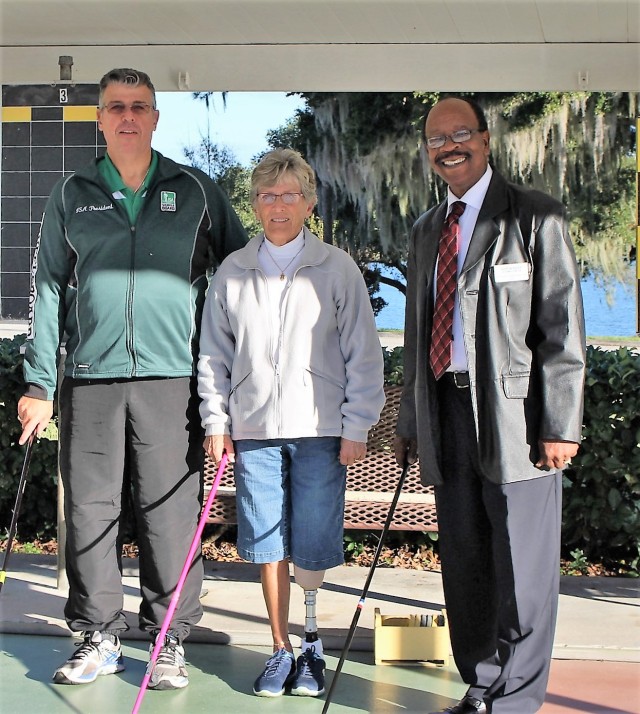 Photograph is of Mayor Birdsong Jr. on the right, Dorothy Healy, and Michael Zellner.

Mayor Nathaniel J. Birdsong, Jr. and City Manager Doug Feacher of Winter Haven extended warm greetings to the 52 shufflers assembled for the Opening of the State Amateur, Any Doubles event which began on Monday, January 4th. The Mayor stated that he had just been re-elected and went on to announce that support was forthcoming in the way of monetary assistance to rejuvenate the Shuffleboard Courts. Winter Haven Club President Wanda Tipton was most appreciative of the commitment for support. She stated that the Club Executive will work with the City to ensure the “best” option is pursued.

Prior to the commencement of the tournament the Mayor and City Manager took to the Courts and began the event by shooting two discs each.  City Manager Feacher challenged the Mayor to a full game but both agreed it would have to be later.  City Business called them both; the challenge game will have to wait.

Participating in the Tournament was the International Shuffleboard Assn. President, Michael Zellner. Zellner offered brief remarks during the Opening expressing his joy at being able to compete in an Official FSA (Florida Shuffleboard Assn.) event.

Also competing was Dorothy Healy who 3 years ago lost her leg in an accident. At that time she and husband Art took up Shuffling and both are now avid and competent shufflers. She admirably makes the case that while accidents can take your physical parts; nothing can take your spirit or detract from your pleasant manner.

2 Responses to A 11 Amateur Any Doubles State Sponsored at Winter Haven!!