We Look Back One Year to the Day!! Remember Norwich? Articles by Glenna Earle, Muriel Burnett and Myrna Bilton.!

Glenna Earle Speaks: Hi Stan; Muriel and I decided to share the info we are sending to you and we will each send pics so you can choose the ones you wish to use as you see fit.  Sandringham on the left; Glenna and David, center;  Muriel and Murray on the right. Click to expand.
Muriel was planning to tell you about Appleton and part of Sandringham and then I will pick up from there.  (See link below to Wikipedia for complete explanation of Sandringham and Church of St Mary Magdalene)
Sandringham http://en.wikipedia.org/wiki/Sandringham,_Norfolk was absolutely a magnificent place to visit….so much so, that we stayed a little longer than was

intended so we could see all the grounds, visit the grand entrance, tea room, museum, “the house” and the church called St Mary Magdalene. By the time we saw all that it was too late to visit the last stop that was planned so we went right on to Darby’s for Fish & Chips.

Sandringham is the Queen’s private residence, owned by the Royal Family, not the British people. We were treated to a superb day, weather-wise, and were so happy to be able to wander the grounds. The museum was very interesting with many vehicles belonging to

royalty which have been used in the past. One of my favourites was a little child’s car which had belonged and was used by, many of the royal children but had the name HRH Prince Charles on it. Also an MG GT  which was a real car but when seen next to a full size person like Grant MacRae, it looked pretty small.

Visited the marvellous old church (St Mary Magdalene; link above) on the Queen’s estate which she frequents when she stays at this residence…..normally for 2 months from Christmas until end of Feb. The Royal Family celebrates Christmas in this little church and then go “home” to have a very relaxed time together prior to lunch.

The church was built in 1528 and the pipe organ is 106 yrs old. It was refurbished 6 yrs ago to the “tune” of (pardon the pun) of 66,000 GBP. Apparently the parishioners were asked to help  sponsor by buying a pipe, of which there are 1500. Will include a couple of pics.

The bus then took us out to the coast so we could have a peak at the sea. We passed through a little town called, Hunstanton, next to the seaside which is extremely picturesque, especially on such a glorious day as we have been fortunate enough to experience.  Hunstanton, above left; homes by the sea, center; and canola, right.
Drove on from there to Morley Swanton, where we enjoyed some local hospitality….Fish & Chips,  with a half pint of beer. I’m afraid some of the guys

were not quite satisfied with a small bit of the delicious beer. The proprietor was very obliging and brought them a pitcher. See Rendall. This building is another ancient one. It was used as an Allied Joint Command post where Churchill & Eisenhower worked  together during the 2nd WW….near an air base.  A whole bunch of character and history, too much for me to absorb. Will need to google this for more detail.

We then completed our journey back to the city of Norwich and  along the way we saw many flowering shrubs and trees, as well as huge fields of brilliant yellow canola ( or rape seed as they call it here; pic above).
Tomorrow we will be taking a boat cruise which we will tell you about later.
This evening we are about ready to flop into our beds once again, after a very fulfilling day of seeing more of this beautiful and striking country,  so steeped in history!  Glenna  (Thanks so much Glenna!!  Great Coverage)  And now to Muriel!)

Muriel Burnett speaks:  Next stop, and a great highlight was Sandringham -the private home of Her Majesty (not owned by the state as other castles).  Her family enjoys Christmas here every year.  She comes here before Christmas and remains until February.  The Duke and Duchess of Cambridge have their home here as well, a wedding gift from Her Majesty.A beautiful spot along the stables.  This day was most enjoyable.  The staff at Sandringham were most helpful.  We were fortunate, because it wasn’t busy and they had time to answer our questions.  We were told in the summer, a thousand people a day might visit. The weather was perfect, and everyone was so interested.   See our luxurious Bus, above and Andi and Allie having Tea!!      Muriel Burnett.   Thanks so very much Muriel!!  Here is a NEW Slide Show..  http://photopeach.com/album/lydl6r

Click on any pic above to expand.  AND NOW TO MRS. BILTON!! As in Myrna!!

Memories from Norwich by Myrna Bilton; Myrna looks back to Australia!! 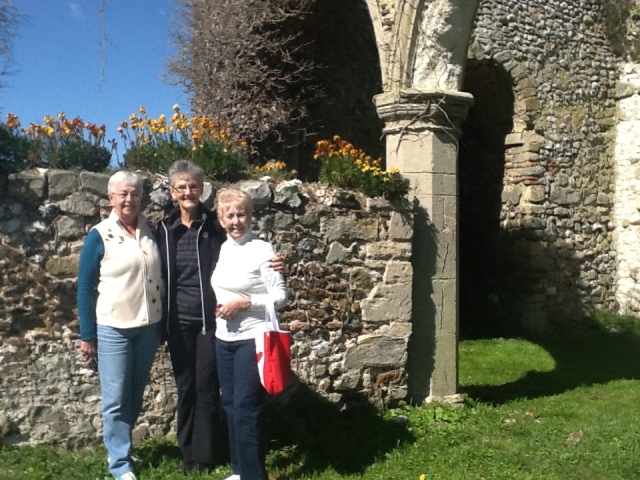 Hi Stan: Myrna speaks: This picture of us gals was taken to-day at the tiny church of Appleton. (“Us gals” are, from left to right: Glenna Earle, Myrna Bilton, and Pam Hill.)

We had another great day in England with sunny weather.
The “SHUFFLEBOARD JOURNEY”  has given me so many great memories and lasting friends. Glenna Earle, Pam Hill and I were team mates in the 2008 ISA Tournament in Australia. The three of us are here in England renewing our friendships. Stan and Lois McCormack were our Canadian captains. They taught us to be good sports people, enjoy the game and promote shuffleboard. For all this we are very grateful and thankful for their leadership.

Another good friend on this trip is Roy Norman and his wife Doreen. Roy and I are past presidents of the Canadian National Shuffleboard Association. Picture of Roy and I was taken at Sandringham.
Cheers  Myrna 2015 04 27.  Thanks so very much Myrna.  Nice variation on the constant theme of Shuffleboard >> that being FRIENDSHIP.

As Myrna brought up Australia, just thought I would give you a link to the Slide Show of the “Get Acquainted Dinner” at the 27th ISA (2008) in Coolangatta, Australia. http://photopeach.com/album/d1rjc2  Stan McCormack.  2015 04 27