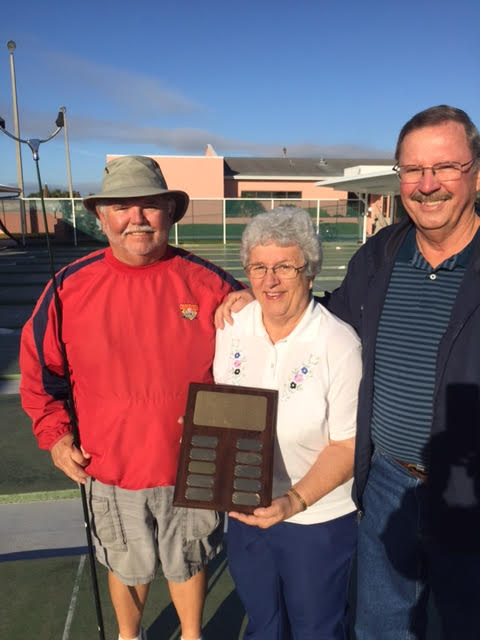 With 46 Men’s Teams and 28 Ladies Teams from all over the country, and especially from all across Florida, what would be the likelihood of two players both from this District winning the National Championship, both receiving the coveted National Pin for the first time in their lives?  A player only gets one lifetime pin, regardless of how many wins are repeated later.

Exactly that took place at Trailer Estates last week.  The winning team at the 2017 National Winter Doubles was Bob Comford and Hank Hoekstra.  It was the pleasure of this columnist to pin the two of them at the Southwest Coast District Tournament at Palmetto on Thursday.  I was so honored at the request of Bob as I was his partner a decade ago in his first tournament beyond the club level.  I have since partnered with each of them in tournaments in the Northern District in past years.

Bob Comford actually grew up on a dairy farm in Indiana whose family included his 10 siblings.  Later Bob lived and worked for MAC tools, retiring as a district manager of sales.  Bob and Winnie have two children and four grandchildren, having raised their family in Orient, OH, south of Columbus.  Since 2007 Bob has often helped the Palmetto Shuffle Club, even serving as President.

Hank Hoekstra grew up in the area of Grand Rapids, Michigan.  After graduating from Western Michigan University 49 years ago, and marrying Bette, he was drafted into the Army immediately, trained at the Non-Commissioned Officers School and sent to Viet Nam in the Infantry.  Hank feels a divine blessing in surviving that War.  He and Bette have three children and have lived in Michigan and Southern California.  In his work as an insurance claims agent and manager, his work took him across the country.  Enjoying shuffleboard in the Southwest Coast District for more than a decade, Hank says the friends you make in shuffleboard is the best part of the whole wonderful experience.  I am sure many of his friends, past, present, and future will agree.  We have a great fraternal spirit among us all.  There is room in this fraternity for new members.  Happy Shuffling.