Chili Days shuffleboard tournament wraps up! Sent along by Bob Weber with Thanks!! 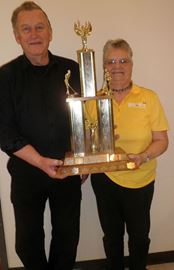 The duo of Ron Pettem, left, and Jean Smith won the Mississippi Mills Shuffleboard Trophy during the annual tournament Feb. 21 at the Almonte arena.

Carleton Place Almonte Canadian Gazette.  Stan speaks: I have no idea how Bob Weber locates these Shuffleboard News Items??  I live about 50km (30 miles) from Almonte and I heard nothing, nor saw nothing???  Good Work Bob.   Stan 2017 02 23.

The final event for the popular winter festival of earlier times in Almonte, titled Chili Days, was held on Tuesday, Feb. 21 at the Almonte arena. Sixteen teams of seniors competed for the handsome trophy, which carries names of winners back to the 1980s.

The teams were selected at random, so everyone was set for a fun day. Each team played four games, with winners selected from the four pools to play off. Thanks to all the volunteers who served as referees and scorekeepers, and to Ruth More who assisted convener Marilyn Snedden.

The Municipality of Mississippi Mills provided coffee and Timbits to start the day, and arena staff and recreation manager Calvin Murphy were most helpful. Leatherworks Catering served a fine lunch once again.

The winners of the trophy were Ron Pettem and Jean Smith, who defeated Norm Fraser and Joyce Lowry in the final playoff game. Other pool winners were Muriel Lawson and Margaret Inwood, and Sid Mohr and Marian James.

1 Response to Chili Days shuffleboard tournament wraps up! Sent along by Bob Weber with Thanks!!