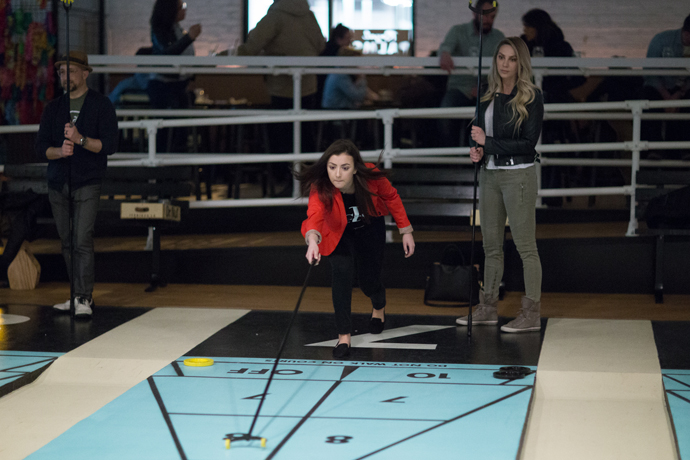 And we should probably specify that you’ll be doing it in a place that’s making the lido deck leisure activity look decidedly cool. Plus, there’s bourbon.

The warehouse-sized space feels like it’s been here for years, serving cocktails out of mason jars in striped cabanas. A well-worn shuffleboard table doubles as a spot to play oversized Connect Four, while the main action happens at two sets of sunken courts.

While you’re waiting for you turn with the cue, hop in the photo booth or see who’s parked in the food truck dock. Maybe it’s the Fat Shallot serving up truffle fries, or maybe it’s the Happy Lobster Truck with, well, lobster. You’re fine either way, and will be even more fine in a few weeks when the rooftop deck opens.

Until then, the Earl Ball, a bourbon, pineapple and ginger cocktail named after the world’s top-ranked shuffleboard player, will have to do. Perhaps, though, you’d rather get acquainted with Sam Allen, also known as “The Godfather of Shuffleboard.” He’s honored here with a fruity tequila-and-mezcal concoction.

And he’s pleased to make your acquaintance, too.