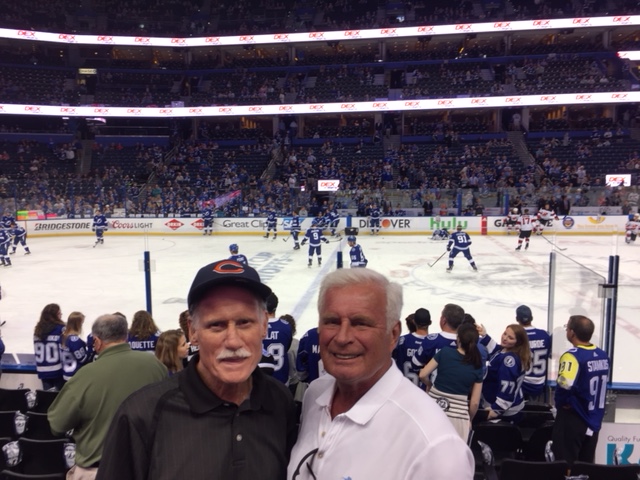 Mike Seyfer and I went to a Hockey playoff game last Thursday between The Lighting and the Devils. Now Mike doesn’t know much about Hockey and of course I’m somewhat of an expert; I’ve been to a couple of Hockey games, I have friends that are Canadian and I’ve played Shuffleboard on a Hockey Court as proof of my Hockey knowledge so I was able to explain to Mike what was going on.

Man, do they play on a big court and the biggest difference between hockey and shuffleboard is they have races from one end of the court to the other and the fans get really excited to see who will win the race; maybe we should have races. They also only play with one disc and they really bat that thing around; talk about hard shooting.

Hockey allows for a kitchen guard and he really limits the kitchens because he is as big as any football player you’ve ever seen and even wears more equipment. The game is really fast, the players run over each other and the fans are really loud; similar to what you see at a shuffleboard match. It was great fun and I’m glad I understand Shuffleboard or I wouldn’t know what was going on.
Earl 4-14-2018    Stan Speaks: I now give you a short read about the atmosphere which exists in NHL  Hockey Games to-day: HOCKEY IS CANADAup  2018 04 14.

The posting above by Earl, caused Doug Stockman to respond: Nova Scotians know about hockey . Thought since the birthplace of hockey is in a town
about a 30 minute drive from my home town ( Berwick ) your hockey knowledge should
be increased . To attempt to draw any comparison between hockey and shuffleboard
takes a great imagination. Earl, I enjoyed reading your attempt .
All the best to both of you .
Regards, Doug S.   Doug also added this link:
https://www.town.windsor.ns. ca/birthplace-of-hockey.html and