TRIBUTE TO JIM MILLER >> We Look Back Two Years.

WE Look Back Two Years in Memory of Jim. 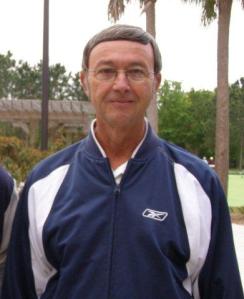 FSA President Dave Kudro Speaks:  I am sitting here trying to come to terms with losing a close friend, shuffleboard partner, and probably the best person I’ve ever met and admired that emulates the best of the best on and off the courts.

I loved how he had such a passion for learning and applying on all his research on making sure the courts and disks were prepared to give every shuffler an enjoyable and equal chance to play to the best of their ability. Usually you would see Jim when not shuffling, talking to shufflers all over the state to not only share what he has learned through his experimentation, but also looking to learn as well from others that prepare courts and disks. This passion was almost as much as his love for playing shuffleboard.
Jim as a player, one would only have to look at current and past plaques and trophies in the FSA Hall of Fame. Jim has won them all. From the FSA State Masters Championship, State Singles and State Doubles, Tournament of Champions as well as a National Singles and Doubles Champion. What I can say though is that I have never seen such a gracious humble winner and always whether its a win or loss, Jim was always a true gentleman’s gentleman.

I know this will really hit home to me next season. When at a tournament (after the draw when he is not my partner) I’d always look for Jim and ask him what line number he would draw. I would always take a deep breath and pray to the Shuffleboard Gods, that I was not in his bracket. My wish was never having to meet him until the finals, if I was lucky enough to get there. With Jim, he never worried about luck, superstitions or head games, he beat you by pure skill. They talk about pro basketball players and their ability to be a great free throw shooter at 85%. I know for a fact and have seen it hundreds of times. You stick trying to clear a possible hide on Jim, and 99 out of 100 times, he would nail it precisely directly behind the disk were it was usually impossible to hit. Yes he was one of the best of the best.

As a Husband, Father and Grandfather, Jim’s eyes would always shine as well as a big loving smile on his face when talking about his wife Josephine (Jo), his sons and his grandchildren.

Our hearts are heavy as we try and come to grips with the loss of someone so special as Jim. Jim will be missed by us all each and every day for he was some so special who meant more to all shufflers than words can say.

Goodbyes hurt the most, when the story was not finished…..

Prayers to Jo and the family for comfort, strength and peace during this trying time.

13 Responses to TRIBUTE TO JIM MILLER >> We Look Back Two Years.