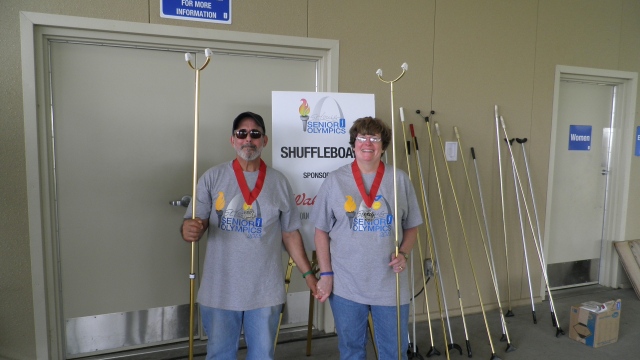 As a group the members of the St. Louis Shuffleboard Club did very well at the 2018 St. Louis Senior Olympics. While most of our members compete in a vast variety of events, in shuffleboard singles and doubles we won 16 Gold, 11 Silver, and 2 Bronze medals.

The St. Louis Senior Olympics attracts over 1000 participants from multiple states. Our thanks to our local chapter of AARP. This is the 3rd year that AARP covered the registration fee for 135 competitors, their family, and friends. That saved my wife and I $94 this year.

Each year a few days prior to the St. Louis Senior Olympics, AARP hosts a Sub Shop dinner where they give out “Team AARP” tee shirts and baseball caps. That’s the only requirement – that we all wear their tee shirts while we compete. After the games are over AARP also holds a banquet at no charge to the competitors who formed “Team AARP” and they give out thumb drives with photos they took of the Senior Olympics.

There has been some talk that AARP might become a sponsor at the 2019 National Senior Games in Albuquerque, New Mexico.

Most of the St. Louis Shuffleboard Club members were able to qualify for Nationals when they competed at the Indiana State Games in May. A few still need to qualify in either singles or doubles, and will have that opportunity at the Missouri Senior Games on June 9th.

After that our next tournament will be in Perryville, Missouri on August 9th. We all look forward to competing in Perryville, not just because the games are fun. There’s a little cafe in Perryville, called the Park-et, with some of the best pies you’ve ever tasted. I had a slice of chocolate whip cream pie last year at the Park-et, and can’t wait to get back there to try one of their other pies. You can see I have my priorities in order.