Are Seniors Discriminated Against??? See What You Think!! 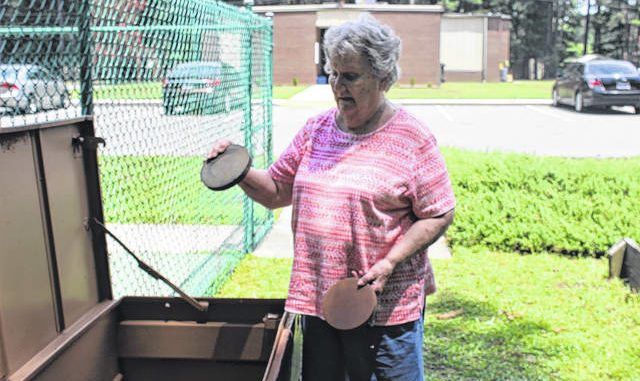 LAURINBURG Some seniors feel that activities areas for older athletes are being neglected by Scotland County Parks and Recreation in favor of youth programs.
Joan Thompson says that she and other seniors are disappointed in the condition of the outdoor activity areas at Scotland Place.
“Nothing is ever done to these areas all year long, shame to say, even for the games,” Thompson said. “Group attendance has gone down because of these issues. How come other the youth activities are so well maintained and supplied? I’m 83-years-old, love the sports, but not in the condition we have to play. It’s just not fair.”
Director Bryan Graham says repairs come down to priority but if there are complaints he is willing to listen and address what he can.
“If someone brings a concern to us, we jump right on it. For example, we had a dogwood tree that was hindering some of our players at the horseshoe pit so we removed it,” Graham said.
The bocce ball, shuffleboard, horseshoe and corn hole equipment and the courts for most of the senior resident’s games at Scotland Place have been let deteriorate from their new condition when the center opened in the 1990s, according to Thompson.
“Every year I play in the senior games at Scotland Place Senior Center,” Thompson said. “[For] corn hole, the bean bags are rotten and have so much tape covering the holes you can’t play decent. [On] the shuffleboard courts, the paint is so worn off you have a hard time judging calls because you cannot see the lines properly.”
The lines and numbers on a shuffleboard deck determine how the game is scored.
Thompson said the two courts are dirty and that the last time she and her friends used them there was no wax to be found. Wax is used to smooth out the surface in order to get the discs to move more smoothly across the deck.
Thompson also says that the courts for horseshoes and bocce ball are poorly kept.
“Horseshoes, the courts are grass grown. It should be sand,” she said. “Bocce Ball, the two courts need leveling and packed dirt. Balls are rusty and there is only one white ball instead of two.”
Graham said he was aware of some of the concerns with the shuffleboard court and had put in an order to have them cleaned. He hopes to be able to have them repainted next budget year.
“We’re at the end of our budget season, so that’s not even a possibility right now,” he said. “We start over July 1 and Tammy Jacobs is now over our senior programs. That’s something we’ve looked into because she started setting up weekly activities for corn hole, bocce and shuffleboard. So we are looking at revamping our shuffleboard area.”
Thompson appreciates the attempt to reach out to the seniors but says that she and her friends don’t want to join the activities because of the poor condition of equipment and playing surfaces.
She has been playing shuffleboard for 10 years and said that it’s not enough to hose down the courts. They have to be cleaned and maintained by a special process, Thompson said.
Graham has been director of Parks and Recreation for the last two years and agrees that there has probably not been much done upkeep over the years. The problem, according to Graham, comes down to budget concerns and priority.
He says that decisions are not based on a participant’s age but involvement in activities Thompson mentioned.
“I’ll be honest with you. If people used them more often, we would see that as a priority, but right now we barely get any use out of the horseshoe pits, out of our shuffle board,” Graham said. “If they’re rarely used, a lot of those funds go to other things within the department that are a priority. If nobody uses it, we’re not going to come out here and spend $500 out of an already a small budget.”
He said the only time the areas were used last year was during the Senior Games.
The budget for the senior center is around $10,000 to 20,000 a year. That money comes through allocations from the county and through grants from the state and the Lumber River Council of Government.
The equipment for those games is stored in a metal box that leaks in the rain and that it is hard for older women to open, according to Thompson. She maintains that the box has rusted and has caused the bocce balls and other equipment to rust.
Graham recognized the problem with the equipment box and drilled holes in it to help it drain properly.
He said replacing equipment is not a “huge cost” but that if there is an issue, participants need to make it known to staff.
Graham said the horseshoe pits had recently been refilled after Senior Games with sand but that grass grew faster than the occasional use could prevent.
Thompson said Graham has promised to address the complaints, but she will wait to see if he follows through.
“I understand that he’s relatively new. I told him I wasn’t interested in inside activities. He said he would see about it in July. He seems like he’s going to do what he said,” Thompson said. “He knows I’m serious about this and a lot of other seniors are.”