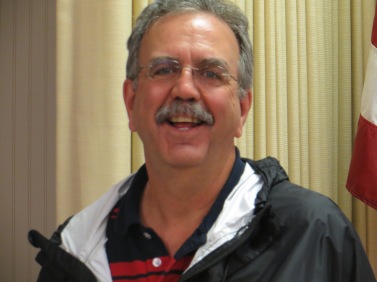 PARTY—HALL OF FAME STYLE; Above we have “MC” Jim Allen and Special Awardee, and Writer, Linda Rebholz.

I have written about many Hall of Fame Banquets in the past. It is an exciting event where we celebrate the accomplishment of reaching 200 points by members of our shuffleboard family. And often, we honor someone with a Special Award for the “behind the scenes” activities and extra things they do

Two players honored were Ron and Pam Nurnberger, a power couple to say the least. To the chagrin of Ron, his wife Pam reached her points first. They chose to present each other and it was fun to watch them banter with each other.

The one other man was Allen Dronsfield from the Northern District who had his wife, Jan by his side. Allen is from Hawaii and is known as an intense and determined player.

Sue McLaughlin is also from Northern District. While employed, Sue had to play shuffleboard around her work schedule but her friend, Marion Lohbusch (a Hall of Famer) was there to help her obtain her points.

Glenda Brake from Zephyrhills was presented by Henry Strong and pinned by her husband, Clar. Glenda is a petite bundle of dynamite on the courts.

Another inductee was Terri Smith who started in the Northern District but moved to SW Coast District after meeting her partner, FSA president, Dave Kudro.

Being an inductee, I viewed this banquet with a different perspective. It really is an emotional time as inductees pour their hearts out about their family, partners and the bonds they have formed. I had to stop and collect myself at one point, I just could not say a word (and the silence was deafening). We remembered that my husband, Phil had been inducted at this same location seven year ago!

The West Coast District, spearheaded by President Jan Cote, did a fantastic job. The clubhouse was filled with flowers and decorative lights and tulle were hung from the ceiling. We saw the fun side of Jim Allen as he kept us entertained as Master of Ceremonies.

Kathy Brennan, president of the Clearwater Club made sure we had lunch each day and many helpers kept the courts prepared. Dessert was the cupcakes that Colleen Austin always brings. These are iced with edible photos of the inductees.

Most of the women had on their fancy dresses and even the men sported their finery. It was a treat to see everyone dressed TO PARTY and that is what we do when not on the courts!!!!!!