Overwhelmed may be the very best choice of words!!!

The photo above was taken on 2019 05 17 in Adelaide Place, Lindsay, ON.  The Red Jackets symbolize the CNSA HOF; each person sporting the jacket enjoys that title, that distinction, that honour!!!  From the left we have : Gary and Barb Pipher; Bill Pollock; Max Tate; Myna Bilton; Stan McCormack and in the Black Jacket, standing proudly, we have the serving CNSA President, Jim Corbeil. 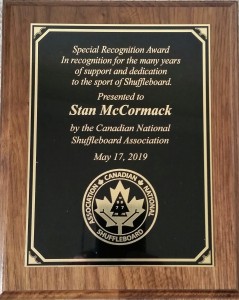 The Corbeils and the Tates drove just under 3 hours to get here; the Piphers and the Pollocks just under 2 hours.  They drove that far to make a significant presentation to Stan McCormack for his support of Shuffleboard during the past 17 years. Stan now resides in Adelaide Place in Lindsay, ON and Management had agreed to host the Presentation.  A find lunch was enjoyed in a private dinning room; the presentation was made in the Lounge. https://www.facebook.com/Adelaide-Place-Retirement-Community-113070388712775/

At 13:00 hrs President Corbeil introduced himself, thanked Adelaide Place for hosting the event, and called Past President Gary Pipher to  the podium.  As Gary has done so many times in his Shuffleboard career, he demonstrated his outstanding ability to assemble the facts; and to present them both cogently and interestingly!!  I am now going to give you Gary’s remarks, word for word. My thanks!!

Stan McCormack CNSA Special Award presentation
Lindsay Ontario May 17 2019
Good afternoon ladies and Gentlemen : My name is Gary Pipher I am from Wasaga Beach , and I have been a good friend of Stan McCormack for many years.
It gives me great pleasure to have this opportunity to say a few words about Stan McCormack at this special recognition award presentation from the Canadian National Shuffleboard Association .

Before I begin, I would like to introduce the Special Shuffleboard Guests here today.

First I would like to introduce my wife Barbara and a good friend of the Mc Cormack’s .  Pic on  your left.

Then we have our current President of the Canadian National Shuffleboard Jim Corbeil of Woodstock and his wife Marlene. Marlene took over the role of Tournament Director after Lorraine Pollock retired.

“Stan is the Man” has contributed more to promote the game of shuffleboard than anyone I can possibly think of over past 20 years.
Stan started his Shuffler web site from what he believed was a necessity to inform people the results of an International Shuffleboard tournament he was attending in Clearwater Florida in 2002. 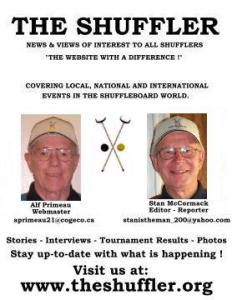 Along with the help of a man by the name of Alf Primeau , they put together a web site called which they appropriately called “The Shuffler”.
Stan and Alf were a good combination because Alf was no doubt the computer geek at the time , and Stan was the roving reporter so to speak.
Stan always had a camera hanging around his neck , and for many years it was not uncommon for him to be poking a recording device in the face of the person he was interviewing and then have them pose for a photograph to complete his story.
Stan kept that original Shuffler Web site rolling along with Alf as his partner until about 2012 , at which time Stan went on his own and recorded everything on the Shufflers Blog which he looked after until turning it over to a new group of reporters in April of this year.
During the 10 years of working along with Alf and the experience he gained it no doubt lead to the perfection we witnessed in his new shuffleboard blog.
“Yes I mean perfection “.
It was on a very rare occasions that you could ever find an error, be it in the grammar, names of tournament players , their scores or names associated with the photos.
The web site was also very user friendly
( I know, because : if I could follow it , anyone could.)
And of course if you subscribed to the blog you automatically received the latest news and updates be it shuffleboard related or a birthday or an anniversary. 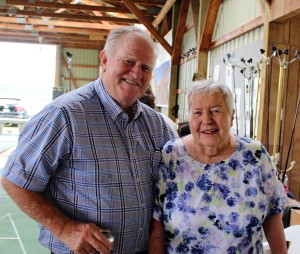 Looking back through the Shuffler archives you will see that Stan’s first article on the Shuffler Blog was about a remarkable lady from this Lindsay area by the name of Peggy House.  Peggy, now residing in Orillia, ON, is shown on the left with World Class Shuffler Glen Peltier.