We Share With You Just a Little about David and Glenna Earle: (2016 Article)
David and Glenna began shuffling about 15 years ago and were fortunate enough to live in a park where an excellent instructing Pro, Marshall Leigh, took both under his wing. David was hooked in a very short time but Glenna dabbled in many other activities and was slower to get started. 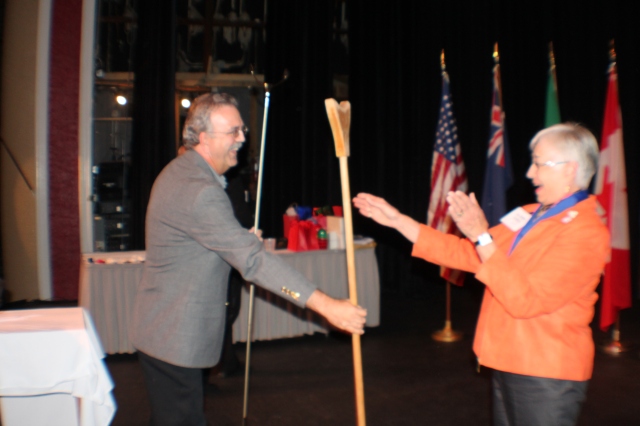 Glenna won the coveted GOLDEN CUE, emblematic of 1st place in the 32nd ISA World Singles. Pic is of Jim Allen presenting the Golden Cue. She had previously won the Golden Cue in Moncton, NB by reason of placing 1st in the 30th ISA World Singles Championship.
Glenna has been VP of Forest Lake Estates for 4 years and passed this position on to another person this past season. Glenna has been working together with David to carry out his duties as club Pres. and VP with the District. She has been conducting some beginner’s classes at ZSC and helped organize other instructional sessions at the club.
Glenna and David were the tournament directors for the National Canada 55+ Games in Sydney, Nova Scotia in 2012 and for the Nova Scotia Canada 55+ Games in 2013, Truro, Nova Scotia. David also served as TD (Tournament Director) for the Norwich (England) UK Inaugural!!

David has his name on the FSA Singles, Doubles and Masters trophies. David is a member of the Central District Hall of Fame as both Player and President. He was awarded the “MVP” Pin during the 100-year Anniversary Celebration. David and Glenna participated in their first International Tournament in Australia in September of 2008. David earned the “Perfect Record”, 10 wins no losses, in the 29th ISA held in Germany in 2010. 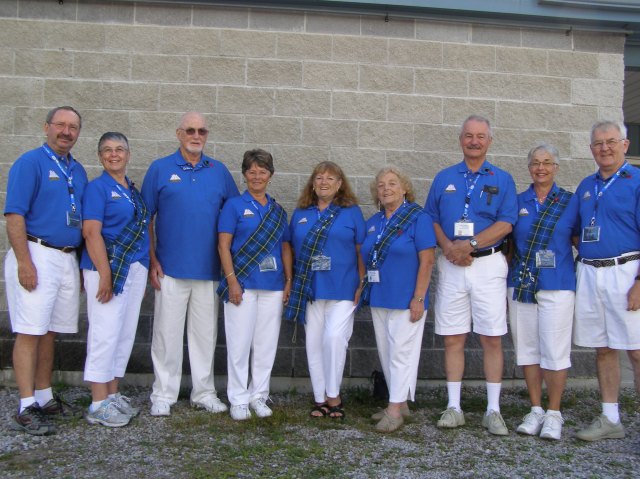 David and Glenna have been successful in resurrecting shuffleboard in NS. Those who follow shuffleboard will know that the NS Club, the Saltwater Club, is active and healthy!! Go here to gain an appreciation of the enjoyment the membership derives from the work of David and Glenna: https://theshuffler.net/2016/09/08/the-saltwater-shuffleboard-club-holds-their-windup-meeting-and-food-fest-sent-along-by-glenna-earle-with-thanks/
Both were involved with organizing a NS contingent for the First Canadian Inter-Provincial Tournament in Ontario in Aug. 2009 and have been actively involved in Canada’s Inter Provincial Events since. Both the Men and Women Teams returned home from Ontario sporting Gold Medals!! They were competing in the inaugural Interprovincial Shuffleboard tournament in Coldwater, Ontario. Pic at left.

On the occasion of the First IP (Inter Provincial) David and Glenna had an opportunity to display one of their other TRUE LOVES, that being Music. On our Cruise both were a vital part of the group of entertainers which captured our attention, our admiration, as they sang and demonstrated their talent.

2 Responses to David and Glenna Earle of Nova Scotia on Canada’s East Coast.