Dieter Reports on the Safety and Health of the German Family in the Trying Period. 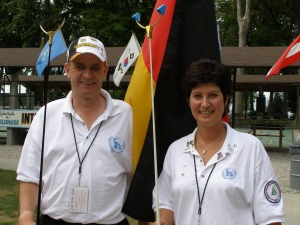 Dieter Hussmann Speaks: Hi Earl I am happy to report that our family and all members of the German Shuffleboard are safe and healthy.

After my retirement at the end of 2018 Birgitt and I moved back to our hometown Meerbusch, and now we enjoy the daily get-together with our friends we have known for so long.
Our son Torben still lives in Langenselbold with his girlfriend Sina. He works for the German Football League and is responsible for the Euro League games of the German teams. This year he is in charge of the club Eintracht Frankfurt.

Today, the German Chancellor and the Prime Ministers of the German states have decided to further relax the existing restrictions due to the Corona crisis.
This means that sports are now possible again, but only training and only outdoors and of course in compliance with all distance and hygiene rules.
This also means that we in Germany can start with Shuffleboard again. But since we only have a few outdoor courts, the offer remains very limited. From June on we expect to play indoor again and also to organize tournaments again.
Due to the cancellation of the world championship we also have the possibility to make up for canceled tournaments. In any case, we will only start with Shuffleboard if we can make sure not to endanger any of our members.
Of course, all this is only possible as long as the number of infections does not rise again. The federal government has set a clear limit for this: if more than 50 new infections occur within 7 days per county, a regional lockdown comes into effect immediately. This is intended to prevent a renewed spread to the whole of Germany.
Personally, I consider this measure to be absolutely correct, especially in view of the so-called second wave, which is predicted by all scientists for the autumn.
In these times I am grateful for a government that bases its decisions on scientifically established facts.
The early and serious warnings of Corona by the public authorities and the serious discussion of the subject in the media have led to a broad acceptance among the population. This in turn has contributed to great discipline in Germany regarding the rules to be followed. In the end, this is one of the reasons why Germany has had fewer infections and deaths than most other countries.
Despite the continuing restrictions and economic consequences I am convinced that we in Germany can look to the future with confidence. However, I am concerned about the well-being of our daughter Alina, who lives and works with her husband Alex in Lynnwood, Washington.
Unfortunately, the USA has become the corona hotspot of the world and in view of the measures that have been thrown into the discussion (injection of disinfectants, UV light into the body, hydroxychloroquine) one must expect the situation to get even worse. The only hope remains the development of a vaccine or a drug to treat corona.
It will take some time before this happens and we all have to live with this new normality. Therefore it is literally vital to continue to be careful in personal contact with others to protect yourself and your fellow human beings.

2 Responses to Dieter Reports on the Safety and Health of the German Family in the Trying Period.