Remembering The Fowlers of The Shuffleboard Capital of Ontario!! 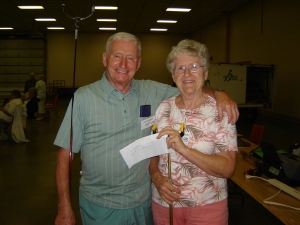 The pic on the left of Leo and Bev Fowler was taken at Woodstock, ON in 2007 when Leo and Bev placed 2nd in the Amateur Event. Sadly, Leo left us in 2016. The pic below was taken on the occasion of Bev and Leo placing 3rd in the Amateur division at Coldwater, also in 2007. Bev’s enthusiasm, personality, and shuffling skills earned her a position on the Canadian Team in Germany in 2010. I  am sure you have not forgotten that the Canadian Women placed 1st in the 2010 ISA Team Event!! Bev would agree that there is no “I” in

team, but there is no doubt that her team spirit, her joie de vie, contributed to Canada’s win!
Bev did not shuffle at the Doubles event in Coldwater in 2012 but she did work; she did support the Club. She contributed two carefully crafted Petite Point pictures for

the Banquet Draw. Lois was the lucky recipient and because her sister Joyce was unable to attend, Lois elected to give the two pieces of art to Joyce. Lois, Bev and Joyce were all overjoyed!!
If anyone cannot remember Bev, she was the spirited young female who jumped up at the Membership Meeting and spoke in favour of a basis for SELECTION for Canadian Teams that included attributes in addition to the ABILITY to shuffle, viz Personal Suitability!!
Stan McCormack.2020 05 20.

3 Responses to Remembering The Fowlers of The Shuffleboard Capital of Ontario!!